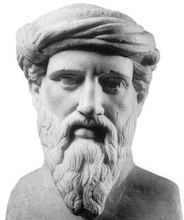 He was active during the first 30 years of the 6th century BC and is considered as one of the oldest Pythagorean philosophers, as well as Pythagoras’ first assistant. While himself Pythagorean, Hippasus’ teachings differed slightly from those of Pythagoreans. For instance, he believed that the beginning of the world is matter (fire) rather than immaterial (numbers). He wrote a book Secret Logos, which he published under the name of Pythagoras, containing his philosophy. Only fragments of his book survive today.

He developed a theory of the musical scale and a theory of proportions, and showed how to inscribe a regular dodecahedron in a sphere.

A scholium on Plato's Phaedo notes him as an early experimenter in music theory, claiming that he made use of bronze disks to discover the fundamental musical ratios, 4:3, 3:2, and 2:1