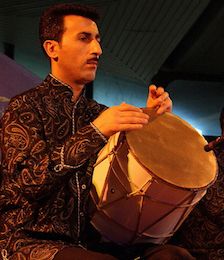 The naghara is a folk drum with double head that is played on one side with the bare hands. It is used in Azerbaijan, Turkey, Armenia, Georgia and other Caucasus regions. It has different names, according to the territory in which it is played. This membranophone is different from the dhol and nagara of India.

This instrument helped the doctors to deal with bad mood, melancholy, intellectual and physical exhaustion, as well as low blood pressure. It was considered that the Naghara could substitute for some medicinal plants and tones like spicy cloves. The rhythmic beating of the naghara is believed to lead to the strengthening of the heart. The naghara is described in the Early Middle Age Azerbaijani literary epic, "Kitabi Dada Gorgud" (The Book of my Grandfather). Instruments resembling the Naghara were also well known in ancient Egypt.